This post is designed to give the beginner a good understanding on where software exists in the “Internet of Things”.

I’ve noticed on multiple occasions that people around the internet have been asking the question “What is IoT software?” and so here I will shed some light on the subject.

A question like this can not be explained in a simple sentence because IoT software is such a broad topic.

Software exists in every aspect of IoT hardware and all have it’s own individual purpose.

Here I will cover many common uses of IoT software but remember that this post can not cover every possibility!


The ‘Certified Internet of Things Practitioner’ Certification provided by CertNexus is an excellent blueprint to begin learning IoT. 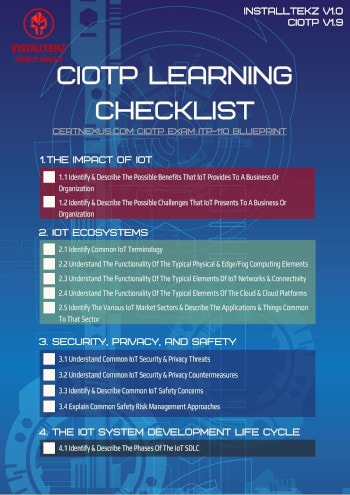 Before we can talk about software we must first talk about hardware. Why is this..?

For software to exist in technology it must exist on physical hardware such as computers and microcontrollers.

The following bulleted list describes some of the most common IoT hardware platforms:

Hopefully we all know that it is people who write software code.

But depending on what these people do with this code will determine if it is closed source or open source.

When a developer is happy that his/her new version code is ready to be released, the software is then compiled into executable code.

If only this executable code is offered to the public and not the source code then we call this closed source.

However, if the developer offers his/her code to the public BEFORE it is compiled into executable code then we call this open source.

Anyone can modify a software program if they have access to the source code.

But no one can modify a software program after it has been compiled into executable, binary code.

Some programming languages don’t compile the source code at all and it is interpreted during run-time. We call these scripted languages.

Because scripted languages are always in “open-source” format, businesses who are only creating software to make money won’t write their software products with these languages.

Let’s say for example we have a software company who needs to sell their software products to make a profit and stay in business.

This company will do everything in it’s power to keep their software source code under lock and key.

After all, who is going to buy their software if everyone has access to it for free?!

We call this closed source.

Websites such as the following are examples of these development sharing sites:

By sharing this code with others on these online platforms, developers can organize and manage code together in something called a repository.

Teams can be established to collaborate on a piece of work and can carry out tasks such as performance metric tests.

An IDE is a software program that can be used to develop another program.

A simple text editor can also be used to write programs if that’s what the developer chooses to use.

Most developers will choose to use an IDE to write their code as IDE’s include  helpful features to make the job easier. The following list explains some advantages of using an IDE over a simple text editor:

Some IoT devices allow us to run a fully-fledged operating system on them.

These operating systems would manage the basic functionality of our IoT hardware and allow us to install any compatible application that we choose.

Many microcontrollers don’t support an operating system and it’s not always needed.

Using an operating system when a project doesn’t require it can increase unnecessary complexity to an IoT system as well as requiring more power to operate.

However an operating system opens up so many possibilities to allow us to create an IoT device with many features.

The following list of operating systems can be found in many IoT computers and are considered as industry standard:

Firmware is simply software that exists in computer hardware IC’s (Integrated Circuits) or what some people would call a microchip/computer chip.

Firmware is usually written by the manufacturer of the hardware device and is used to operate the hardware that it exists in.

Most firmware’s have the ability to be upgraded and should always be kept up to date whenever possible for security and privacy reasons.

A manufacturer may improve the software to introduce new features or to patch security vulnerabilities which may allow attackers to compromise computer systems.

No matter what electronic device is used in an IoT system, you can almost guarantee that it has firmware in it somewhere.

5. What Does IoT Software Do?

An edge computer exists at the very end of an IoT system and this is what we are usually referring to when we talk about “Things“.

Raspberry Pi and Arduino Uno for example can be used as an edge computer.

If you’re unfamiliar with Arduino then you can check out my beginner’s guide here.

These edge computers use electronic sensor components to monitor the world around us such as temperature and light.

Some devices or “Things” run an operating system at this stage and most devices here will use microcontrollers.

Software that runs on these devices are referred to as embedded software as the software needs to be specific to work on the hardware.

The software at this edge stage of the IoT system may perform the following tasks:

Programming languages in edge computing can include:

The definition of a server indicates that it provides a service of some kind to us.

There are many different IoT software servers on the internet which offer an array of possibilities.

You may have heard of the following terms which can describe this type of service:

These can offer us IoT functionality such as:

Programming languages found in servers can include:

The following bulleted list describes software and functionality that may exist on a mobile platform:

The “Internet of Things” couldn’t be possible without networking devices together, weather that’s over the internet or in a small local network.

Much of the software that operates in networking isn’t directly controlled by us, the user.

The following sub-headings describe some of the main areas where software exists in networks:

Devices used to network computers together are often called nodes.

These nodes can exist in the form of routers, gateways, switches and hubs for example and usually have embedded firmware in them.

Sometimes we can usually find an operating system installed in them too.

Nodes also pass data through them which is controlled by network protocols which is another form of software.

The TCP/IP protocol suite is what makes the internet and local networking possible.

This suite is made up of many protocols that have a multitude of functionalities from controlling data transmission to encrypting traffic for security purposes.

For more information on TCP/IP why not take a look at my beginner’s post here.

There are many messaging protocols that can be utilized by a user to help create an IoT system.

Depending on which of these protocols to use would depend on the users needs and are entirely optional.

The following list introduces you to some of the most common messaging protocols used in IoT today:

Software platform applications can exist in the form of mobile apps or web apps for example.

Some software platforms exits in both mobile and web which work together.

Some of these platforms are kept closed source and remain property of a business and others are entirely free and open source.

The following sections provide a list of example software platforms available as of today:

This aim of this post was to answer the question of: “What is IoT software?” where I gave an overview of where software exists in every major area of the “Internet of Things”.

If you would like more guidance on what programming language to learn for the “Internet of Things” then why not check out my post on this topic here.