Affiliate Disclaimer: "installtekz.com is supported by it's readers. Please assume all links are affiliate links. If you purchase something from one of our links, we may make a small commission from Amazon or other third parties. It helps us pay for the running of this website. Thank You"

So after endless hours of playing around with this little device, I decided to write the Mini A8 review.. and so here it is!

The mini A8 uses the Android operating system and incorporates the ARM 8 processor.

It is a relatively small device which is manufactured by a company in China and the device has a low profile making it possible to fit in the palm of your hand.

There seems to be very little help available from the manufacturer as they don’t seem to have much support available outside their native language.

As you can guess, this is causing huge frustration among many customers of the device as many of them don’t speak much Chinese.

According to the official manufacturer, this device is capable of sending it’s location via GPS and can also be used as an audio bug, where the user would call the device from a phone and the sound from the microphone can be heard as if you were calling another phone.

The instructions that came with my tracker is in both Chinese and English and it does print a web address of: http://gpsui.net but as you can see if you head over to this site, it’s in the manufacturers native language of Chinese and isn’t very helpful to the rest of us very much at all.

Let’s take a closer look at the Mini A8 and see what exactly can be done with this handy little unit, and maybe also more importantly, what it can NOT do.

How Does The Mini A8 Work?

To control the Mini A8 we need to send it commands via SMS text messages.

There are various commands that the bug accepts which when setup correctly, we should see the response by various different means, depending on what command it had been issued with.

For example: Some commands only respond back with an SMS message and some commands return data back to the mapping system on the manufacturers website to show where the device is located.

If we wanted the location of the tracker for example, we would send the SMS command ‘DW’.

I am not sure what ‘DW’ is abbreviated to and seems rather obscure as with all the SMS commands with this device.

One of the main problems with this function is that the manufacturer has chosen NOT to send you the co-ordinates directly, but to send them to their own system.

This system can be found on the website at: http://e5ex.com or through the android and IOS app called Toro which is available on the usual app stores and also on the e5ex.com home page of the website.

An app created by the manufacturers called ‘Toro’ existed on the Google Play store for determining where your device is located but it seems to be removed now.

The audio seems to have a good standard quality and it really is just like listening to the other end of a phone.

One of the great features about this product is that when you call the device it automatically answers the call.

This is something that can’t be done with the latest android versions I believe as this type of function would be a security and personal privacy risk.

What The Tracker Does NOT Do

This is the kicker.

The manufacturer describes this device as having GPS functionality when in fact it does not.

It uses the phone network to determine it’s position but this is not a very accurate representation of any location.

Please note that the Mini A8 device does NOT have GPS hardware built-in and thus it does not have true GPS as it uses the GSM phone network.

Using the phone network is highly inaccurate compared to true GPS and this means that the tracker could be 1 mile or even further away from its reported position.

Is There An Alternative?

Although I haven’t purchased one myself, If I was to replace the Mini A8 I would opt for the slightly more pricey tracker by Tkstar on Amazon.

Although this item looks alot bigger than the Mini A8 in physical size, this Tkstar tracker description indicates four advantages:

Most importantly though, the item description AND user reviews seem to suggest that the GPS functionality is working, and up to 5-10 meters of accuracy.

That, coupled with the accompanying app, geo-fencing, and other features, what more could you ask for?

If you’re looking for a dirt cheap method of spying on others through sound only then this handy little gadget will be a good choice for this kind of situation.

However if you’re looking for a tracking device to keep tabs on someone or something such as a GPS system would do then you will be a very disappointed customer of this product.

Here is a small extract from the manufacturer:
“The tracker is designed for advanced tracking/monitoring specifically for vehicle tracking using GSM and GPRS technology.

The tracker is designed for use in any vehicle to track their location, such as caravans, boats, motor homes, trucks, vans and construction machinery and many more – live tracking possibilities are limitless.

This is particularly useful if your vehicle, pets, child or your belongings have been stolen. Time to enjoy the benefits this tracker brings!”

The toro app on Google Play seems to be down.

If you have an android device then why not check out my app! It was designed to send the text message commands quickly and easily. 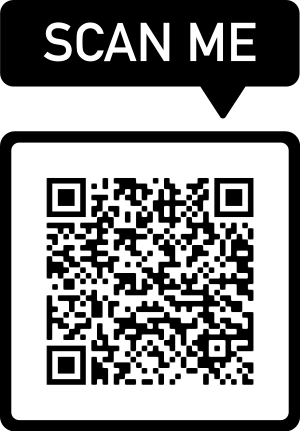 The Mini A8 Controller app was built to help you send those SMS text message commands to the Mini A8 tracker device with ease.

This is an unofficial app created by me and I am in no way associated with the manufacturer of the Mini A8 device.

Please be aware that your local SMS messaging and call rates will apply by using this app.

I bought one of these Mini A8’s a while back, and when I discovered that sending the SMS commands required some really obscure messages, this gave me the idea for creating this app.

The commands are not easy to remember and if you don’t have the instructions handy then this would hinder anyone from using the device.

This is a small app to keep track of the commands. 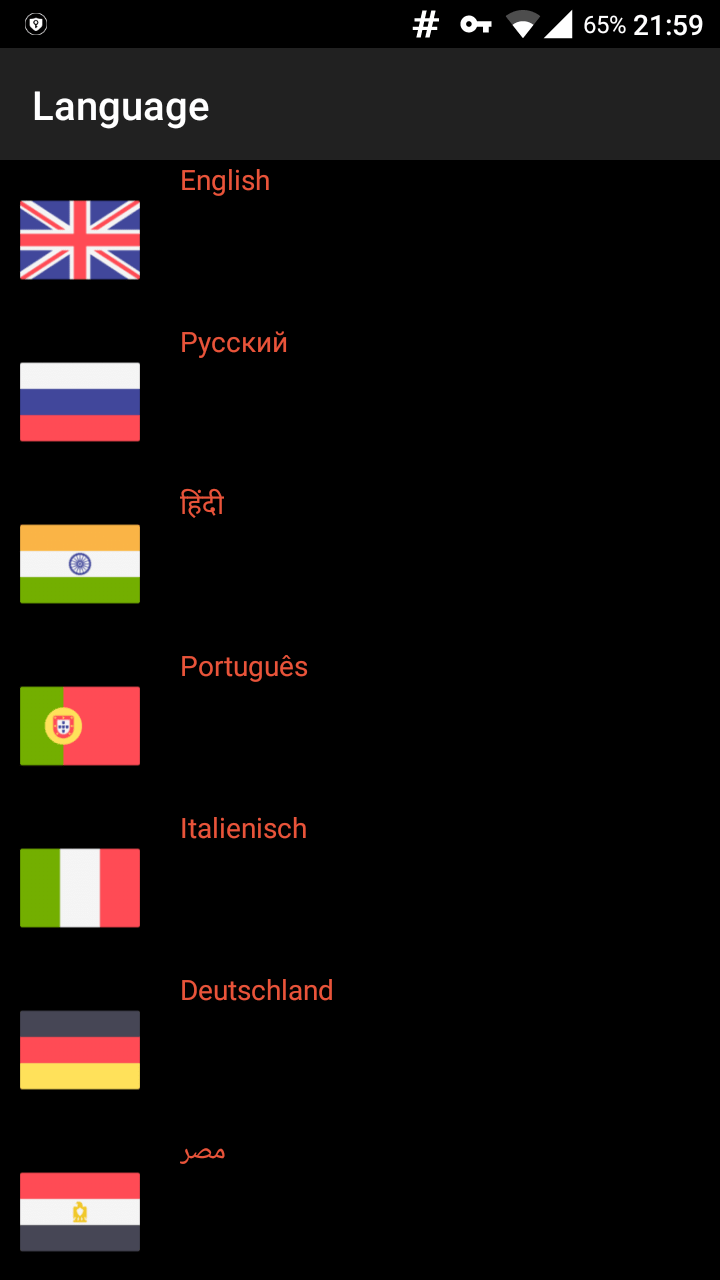 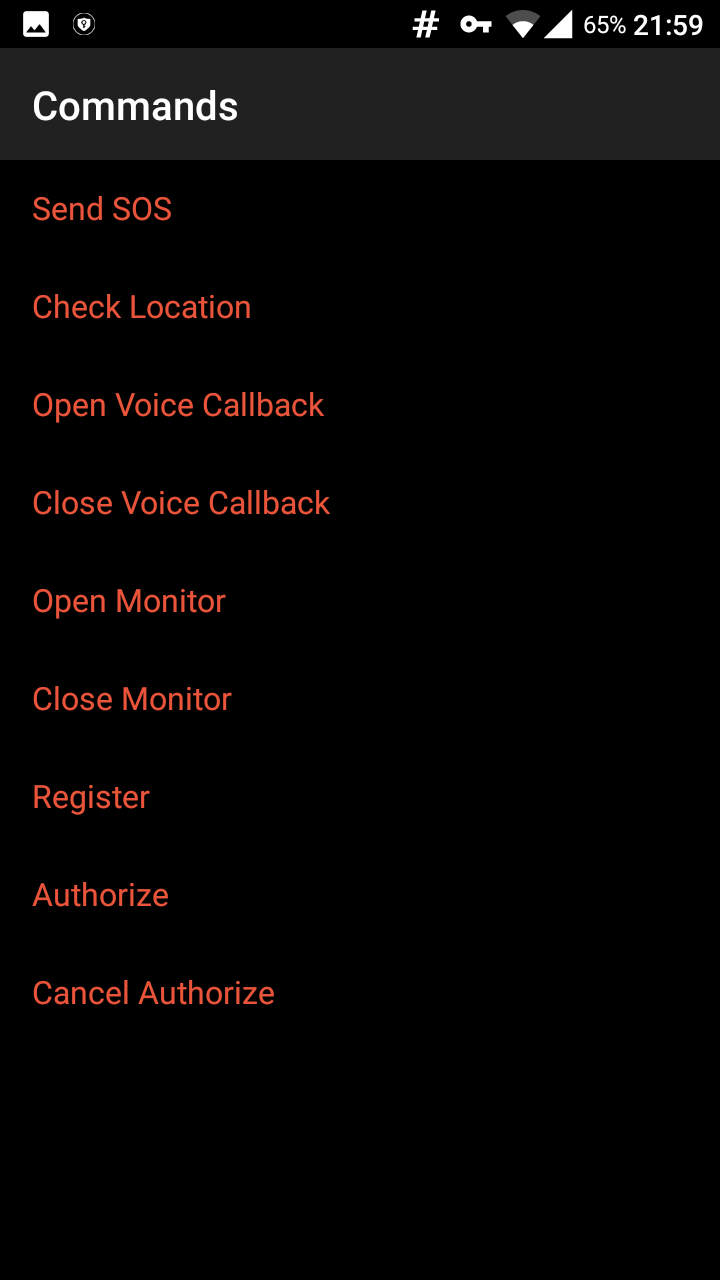 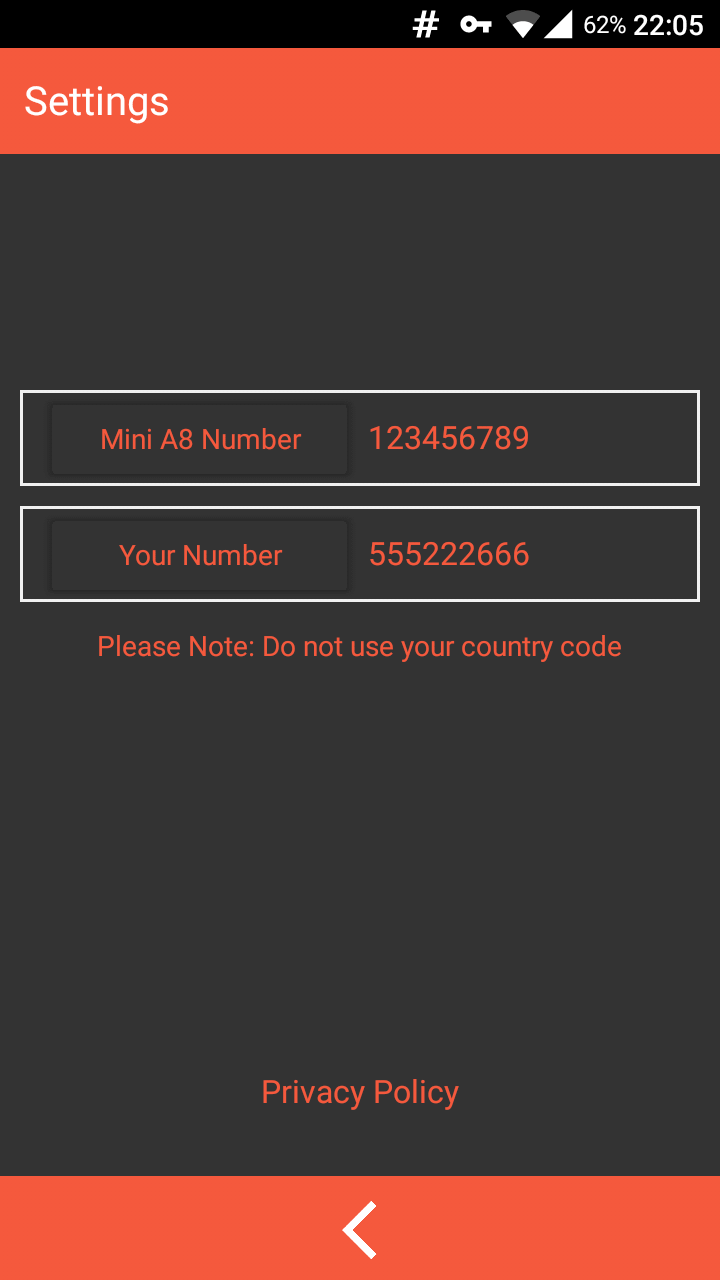 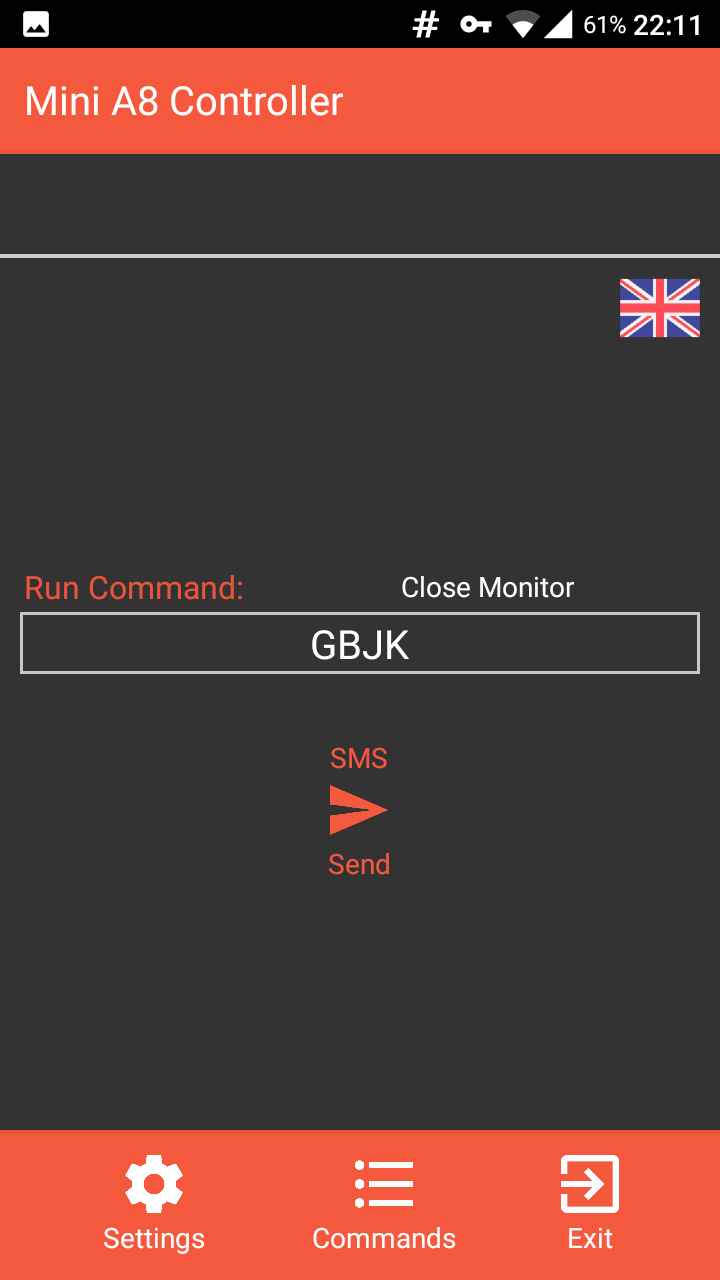 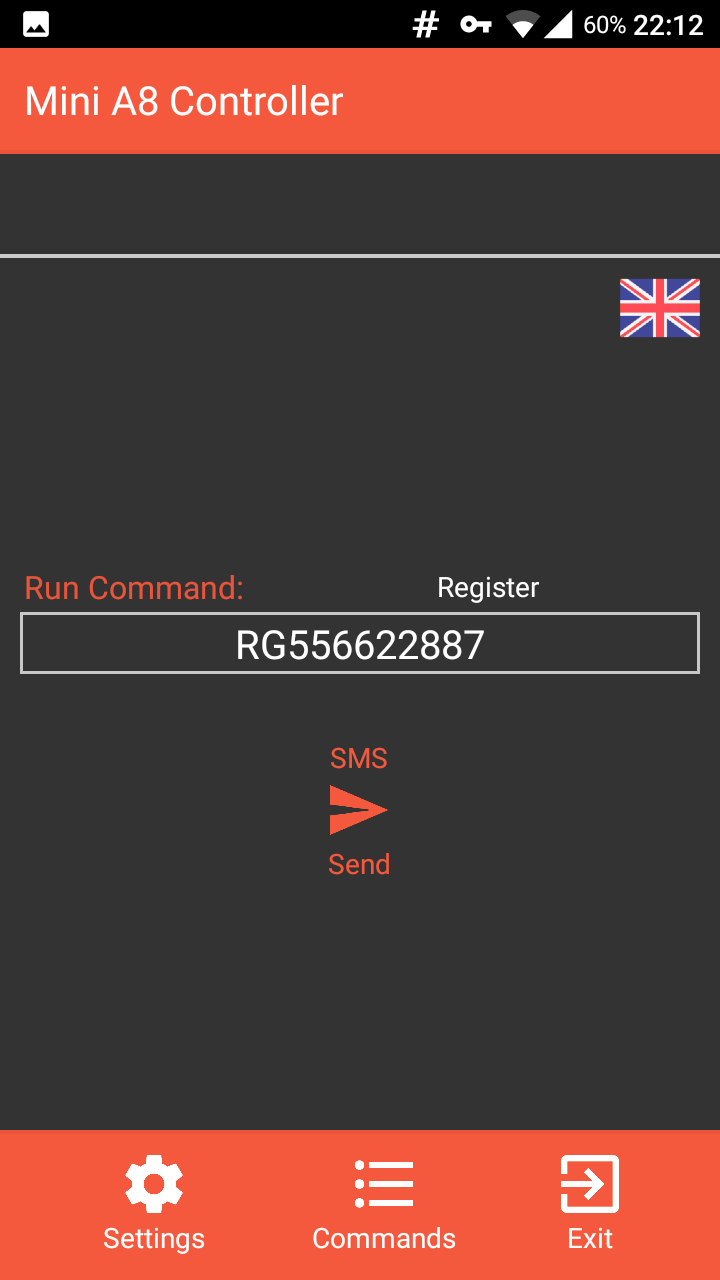 Why Is The App Not In The Google Play Store?

The app was removed from the Google Play Store because it uses the text messaging component.

Google changed their policy on the use of this component in which they would only allow the app to stay on the store if it was a default text messaging app.

In this case it was not. After battling it out with Google for almost six months, I decided to host the app here.

I created a dedicated website, just for the app.

Although I have planned to move the app here and remove the website. The site was called: mini-a8-app.com and this link is still present in the app.

If/when I update the app I will remove the link and point it right here to this post.

Below is a screenshot of the ratings that the app had from users while it was in the Play Store:

I hope you found this info and app helpful.

As helpful as it can be I guess because this little device could have been so much better if true GPS was used in it’s design.